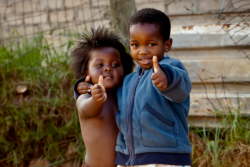 Did you know that every ten seconds a report is made about a child being abused? Or that about four children die every year as a result of abuse? It is a very sobering reality that children are being horribly mistreated every day by adults who are meant to love and care for them. Along with physical damage that is being done to children, there are also equally devastating emotional wounds created by harsh words or neglect.

This article talks about four different types of childhood abuse. These are: physical abuse, neglect, psychological abuse, and sexual abuse.

Physical Abuse
Many of us automatically picture some sort of physical abuse if we hear someone speak of childhood abuse. Physical abuse includes deliberate aggressive actions on the child that inflict pain. Wounds, bruises, burns, and sore muscles are all examples of signs of physical abuse.

Like many boys in abusive homes, Matt lives in fear of his father coming home from work. He forgot to mow the lawn today after school and is worried that his father will become furious again, only to yell and hit him. He wonders if his father has been drinking, which will only make the hitting worse.

Neglect
Did you know that when parents are continually unavailable for their children it constitutes abuse? Neglect, or the absence of parental care, can have damaging effects on a child’s well-being. It is also the most common form of child abuse.

Because Linda’s mother is gone again and there is no food in the fridge, she has to figure out how she and her two younger sisters are going to eat today. They often go hungry and feel unsafe as well as unloved. They do not know how long their mother will stay when she comes home, and often, they are left to fend for themselves.

Parents may neglect children because they abuse a substance and are not aware enough to care for others or make plans for them. They may have a mental illness, like severe depression, that keeps them home lying in bed. While they may be present, they are not truly present for their children. Parents who neglect their children may not even have an addiction or illness. They may be consumed with a job, activity, or another person, to the extent that they are rarely available for their children or caring for their needs.

Psychological Abuse
Betsy’s mother often makes harsh comments toward her. She tells her she is stupid and that’s why her grades are so bad. She tells her she is getting fat and won’t be able to find a husband one day. Betsy feels horrible about herself and has little hope for her future. These cruel comments from her mother make up psychological abuse. In fact, all behaviors toward children that cause mental anguish or deficits constitute psychological abuse. It is also termed ’emotional abuse’ because damage caused to one’s mental state inevitably creates emotional damage.

Besides strong critical statements, psychological abuse can also include: yelling frequently, withholding kindness or affection, prolonged periods of silence, and harsh jokes, to name a few examples. Like any type of abuse, there may be degrees in severity, but the actions still constitute abuse.

Sexual Abuse
When someone touches a child in a sexual way or commits a sexual act with him or her, they have committed sexual abuse. Sexual abuse includes any type of behavior toward a child that is intended for an offender’s sexual stimulation. Fondling, forced sexual acts, or indecent physical exposure are some examples. Abuse includes one isolated event as well as incidences that go on for years.

While many people have stereotypes of what a sexual offender may look like, the disturbing fact is that they are often relatives of the child. People that family or friends would never imagine are behaving in such ways are more often than not the culprits.

Every time 8-year-old Gina is about to go to her grandfather’s house for the summer, she starts acting nervous and telling her parents she doesn’t want to go. They have no idea that she has been touched inappropriately by her grandfather and told not to say anything to anyone. It is important that her parents encourage her to share what is on her mind when they notice her reappearing anxiety.

How to Report Suspected Child Maltreatment

Childhelp® is a national organization that provides crisis assistance and other counseling and referral services. The Childhelp National Child Abuse Hotline is staffed 24 hours a day, 7 days a week, with professional crisis counselors who have access to a database of 55,000 emergency, social service, and support resources. All calls are anonymous. Contact them at 1.800.4.A.CHILD (1.800.422.4453).

If you need help with personal or family situations, you may wish to visit our resources on Where to Find Help.

If you suspect a child is being abused or neglected, or if you are a child who is being maltreated, contact your local child protective services office or law enforcement agency so professionals can assess the situation. Many States have a toll-free number to call to report suspected child abuse or neglect. To find out where to call, consult the Information Gateway publication, State Child Abuse Reporting Numbers.